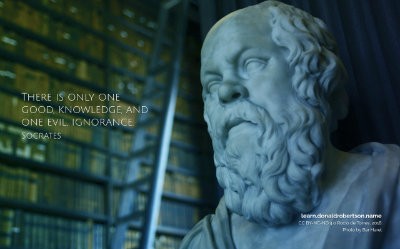 One of the questions I'm most commonly asked is "What books should I read first?" There are many different approaches you could take, bear in mind this is just my typical recommendation and it might not suit everyone. It's geared toward a more balanced appreciation of Socrates rather than Plato's philosophy.

We have three main ancient sources for the life and philosophy of Socrates: Plato, Xenophon, and Diogenes Laertius. There's a lot to read by Plato, especially as his most famous work, The Republic, spans ten "books" (like a modern chapter). We also have surviving Socratic dialogues attributed to Xenophon. In addition, we have short biographies of Socrates and his most famous students written some 500 years later by Diogenes Laertius. Diogenes is less reliable than Plato and Xenophon but nevertheless valuable because he probably had access to other ancient texts, which are lost to us today.

Most people probably try to read Plato's Republic first but that can be a daunting task. I would normally recommend starting with the chapter on Socrates in Diogenes Laertius because it's easier to read, and provides a good introduction. I created a special e-book containing the relevant excerpts, which you can download free of charge.

Next, I'd normally recommend reading Plato's Apology because it's also quite short and one of his best known works. I'd also recommend comparing it to Xenophon's Apology. So you'll get a good sense of Socrates' character from these two texts, and become familiar with the similarities and differences between our two main sources. Those texts provide a fascinating vignette depicting one of the most important events in Socrates' life but they only deal lightly with his philosophy. So I'd suggest that the next thing you read should be Plato's Symposium. This is a longer text but one of Plato's most famous and most accessible dialogues. It depicts Socrates at a drinking party engaging in philosophical banter about the nature of love but it also adds several vivid details about his life and character. Most people find it easier to read than The Republic so it makes a good starting point. Conveniently, we also have Xenophon's Symposium, so you can read that next for comparison. Xenophon's Symposium will also introduced to Antisthenes, one of Socrates' older students, who inspired the Cynic tradition. That's helpful because his interpretation of Socrates stands in contrasts to that of Plato's Academy.

By the time you've read those you'll probably be capable of finding your own way forward. However, if you want some more suggestions then, as you started with the Apology, I'd recommend reading reading the other dialogues by Plato dealing with the last days of Socrates, particularly Crito possibly also Euthyphro. I would also recommend reading the beginning and end of The Phaedo, as it portrays Socrates' last moments, but the central discussion of the soul's immortality that comes in the middle probably seems tedious to many people and may reflect Plato's own concerns more than Socrates' original philosophy.

Then I'd suggest reading Xenophon's Memorabilia of Socrates, which is a longer text but also quite easy to follow. Then you might feel more prepared to dive into Plato's magnum opus, The Republic. Book 1 of The Republic is more like Plato's earlier dialogues and can be read as a stand alone piece, it's quite engaging and easy to read.

I'd also recommend reading the other early dialogues of Plato, such as Charmides and Gorgias, as they're traditionally believed to provide a more accurate representation of the real Socrates, whereas Plato's later dialogues (including Phaedo and The Republic) increasingly used Socrates as a mouthpiece for other philosophical ideas with a more metaphysical slant.

The GoodReads list below is much more extensive and contains more academic texts and biographies. I'll just list a few books here that I tend to recommend people consider reading first as introductions:

Here's a link to a GoodReads list called Books on Socrates, to which I've asked people to add their favourites recommendations. Please add your own suggestions to this list and in the Discussion area below.