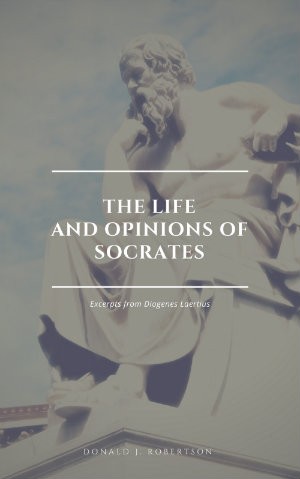 He is nearest the gods who has fewest wants.

He used to say it was strange that, if you asked a man how many sheep he had, he could easily tell you the precise number; whereas he could not name his friends or say how many he had, so slight was the value he set upon them.

There is, he said, only one good, that is, knowledge, and only one evil, that is, ignorance; wealth and good birth bring their possessor no dignity, but on the contrary evil.

And, being once asked in what consisted the virtue of a young man, he said, "In doing nothing to excess."

He had invited some rich men and, when Xanthippe said she felt ashamed of the dinner, "Never mind," said he, "for if they are reasonable they will put up with it, and if they are good for nothing, we shall not trouble ourselves about them."

He would say that the rest of the world lived to eat, while he himself ate to live.

To one who said, "You are condemned by the Athenians to die," he made answer, "So are they, by nature."

To one who said, "Don't you find so-and-so very offensive?" his reply was, "No, for it takes two to make a quarrel."

When he was being initiated into the Orphic mysteries, the priest said that those admitted into these rites would be partakers of many good things in Hades. "Why then," said he, "don't you die?"

He used to say, as we learn from Hecato in his Anecdotes, that it is better to fall in with crows than with flatterers; for in the one case you are devoured when dead, in the other case while alive.

When he was asked what advantage had accrued to him from philosophy, his answer was, "The ability to hold converse with myself."

Being asked what he had gained from philosophy, he replied, "The ability to feel at ease in any society."

It happened once that he set sail for Corinth and, being overtaken by a storm, he was in great consternation. Some one said, "We plain men are not alarmed, and are you philosophers turned cowards?" To this he replied, "The lives at stake in the two cases are not comparable."

Being asked how Socrates died, he answered, "As I would wish to die myself."

The story goes that Socrates met him in a narrow passage, and that he stretched out his stick to bar the way, while he inquired where every kind of food was sold. Upon receiving a reply, he put another question, "And where do men become good and honourable?" Xenophon was fairly puzzled; "Then follow me," said Socrates, "and learn." From that time onward he was a pupil of Socrates.

On this occasion Xenophon is said to have been sacrificing, with a chaplet on his head, which he removed when his son's death was announced. But afterwards, upon learning that he had fallen gloriously, he replaced the chaplet on his head. Some say that he did not even shed tears, but exclaimed, "I knew my son was mortal."

They say that, on hearing Plato read the Lysis, Socrates exclaimed, "By Heracles, what a number of lies this young man is telling about me!" For he has included in the dialogue much that Socrates never said.

A story is told that Plato once saw some one playing at dice and rebuked him. And, upon his protesting that he played for a trifle only, "But the habit," rejoined Plato, "is not a trifle."

One day, when Xenocrates had come in, Plato asked him to chastise his slave, since he was unable to do it himself because he was in a passion. Further, it is alleged that he said to one of his slaves, "I would have given you a flogging, had I not been in a passion."