Welcome to the Stoic Therapy Toolkit

Welcome to the Stoic Therapy Toolkit!

Over the past twenty years or so, I've been asked many times for a convenient summary of Stoic psychological practices, which the Stoics called their "therapy" (therapeia) of the passions. Through the Modern Stoicism non-profit initiative we've designed protocols for Stoic Week and Stoic Mindfulness and Resilience Training (SMRT), which have been tested with over ten thousand participants around the world and refined each year based on their feedback. We've gathered a large amount of statistical data supporting the benefits of Stoic practices like these on established measures of mood and life satisfaction, especially when forming a regular daily routine. 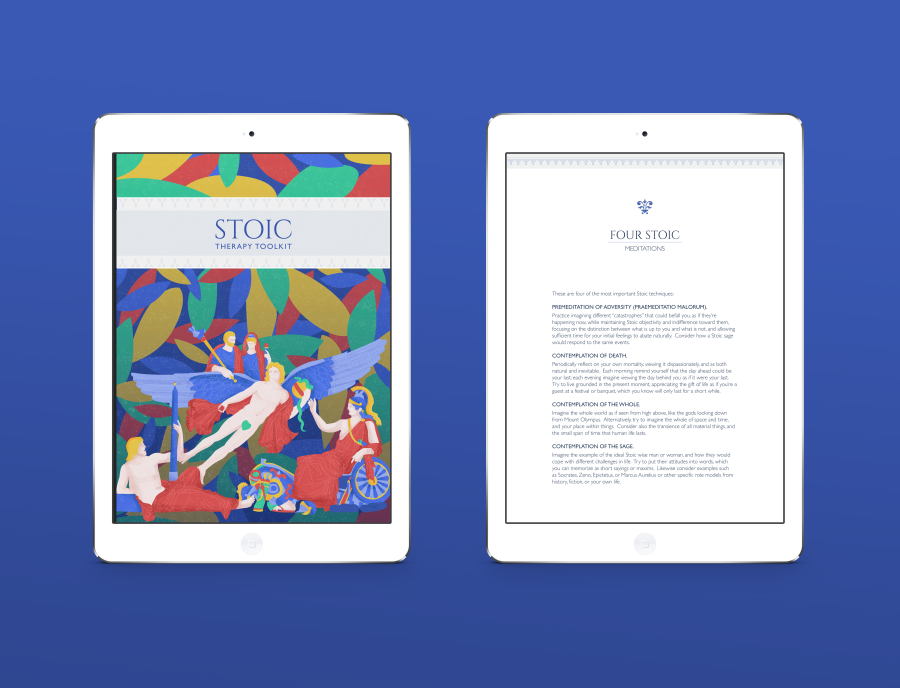 This toolkit draws on that research as well as the guidance contained in my own books on Stoicism: The Philosophy of CBT (2010), Build your Resilience (2012) and Stoicism and the Art of Happiness (2013). It's intended as a concise summary, an aide memoire or "cheat sheet", if you like. So if you're completely new to Stoicism you'll still find it helpful but, of course, you should expect to read some books on the subject as well to learn more.

I'd like to give special thanks to our graphic designer Rocio de Torres, who's beautiful artwork has really brought this PDF to life. The cover shows the Roman monument to Emperor Antoninus Pius and Faustina, the adoptive family of Marcus Aurelius. Marcus described himself as a "disciple" of Antoninus, and spends more time describing his virtues in The Meditations than those of anyone else. Although not a philosopher himself, Marcus clearly saw Antoninus as a natural Stoic. The figure in the centre, between personifications of the Campus Martius and Rome herself, is thought to be the deity Aion or Eternity. Marcus appears to personify Eternity in a similar way in his reflections:

How many a Chrysippus, how many a Socrates, how many an Epictetus, has Eternity [Aion] already swallowed up! – Meditations, 7.19

You can view the PDF on the next page by clicking Continue, and underneath it you'll find a download link.

Please leave your feedback in the comments below. Thanks as always for your support.

This material is provided completely free of charge. However, if you actually enjoyed it so much that you want voluntarily to pay something in return then you might want to consider becoming a patron of my work.